On Daniel Island, Father Time Wears Shorts and a Smile

It’s the middle weekend of January. I’m out for an afternoon round of golf with my dad and youngest son at the Daniel Island Club. All three of us are wearing shorts. Come to think of it, I haven’t seen any golfers today in long pants. And the course is packed.

We just had a good friend, who is a rep for a large golf equipment company, tell us he’s never had so many calls in the middle of the winter. Pro shops are selling out of golf balls left and right.

The explanation is simple: blue sky and warm sunshine. The two things we take for granted the rest of the year. But, it’s January!

When I stop and think about it, why wouldn’t it be sunny? As far as I’m concerned, the sun has not stopped shining since the wee hours of the morning of my birthday, November 3. Our loveable losers did the unthinkable. The Cubbies won the World Series. It was the kick in the rear I needed to stop living in 1985. That’s the year my three sons hear about over and over again. The year the great Chicago Bears dynasty began… and ended.

Then the sun got brighter. It wasn’t quite time for it to set. A new year began, another reminder not to live in the past. Yes, it’s not 1981 anymore. This time mighty Alabama did the unthinkable and lost to little ol’ Clemson. Dabo had finally planted that orange flag back on top of the mountain.

As my brother says, surely this means Jesus is coming back soon.

The roars of the crowds have subsided. The confetti has been swept up. All those players with the big smiles? They’ve moved on to other things. But all those memories are ours to hang onto. They get bigger and better with time, and will provide great stories for my sons to tell their own families.

As my seven-year-old sticks a tee in the ground on our last hole, I recline back in our cart knowing that 2017 is going to be a fine year. The sun is going to keep shining. And the Masters is right around the corner. 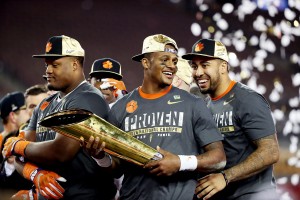