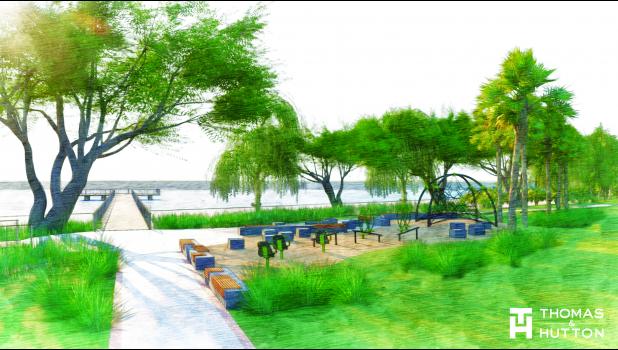 Big Changes Ahead for the Daniel Island Shoreline

The largest grant that the Daniel Island Community Fund has historically received is paving the way for a wide variety of improvements to the island’s waterfront along the Wando River! According to our dear friend, Jane Baker, Vice President of Community Services for the Daniel Island Property Owners Association, those changes are coming soon. The Shoreline project is part of the $1 million grant that recently funded the addition of the Guggenheim Terrace, which opened earlier this year and hosted Daniel Island’s highly acclaimed Night Market during the summer months.

Over the last two years, Daniel Island’s POA has been working diligently in permitting their plan for the Waterfront Park. The dock permit application (currently pending) was originally obtained years ago when a marina was once contemplated for the waterfront park.

Lining the shoreline near the end of River Landing Drive will be a variety of enhancements and renovations including a new playground for children, a community table, creative seating, new landscaping, swings, moon lighting, a hammock garden, and a brand new dock complete with space for a sailing program and kayak/ paddle boards. This new improvement to the Shoreline is exciting news for the Daniel Island community!

The Daniel Island POA anticipates that the final dock permit will be approved within the next few weeks so construction can begin on this exciting project. With the recent completion of Guggenheim Terrace, we can only imagine how amazing this next project is going to be!

In tandem with the new development of The Waterfront, the Shoreline project will further increase the livability and desirability of this portion of the island. It will be a draw for new retail and restaurants and will further increase our island’s viability – something we certainly can’t argue about!